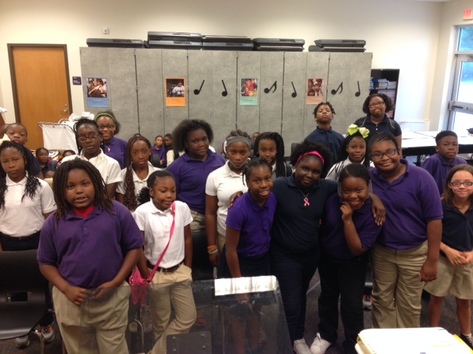 The original  Hodge Celebration Chorus was established during the 2004-2005 school year,  but over tthe past few years due to excellent musicianship and popularity, it  has become an auditioned ensemble. Students are choisen from a   select group of students from grades 4-5 who demonstrate the ability to match pitch, sightread, memorize pitches, with  a desire to sing, perform and excel in the art of music history,appreciation and theory. This group of young talented singers is made up of members of the Young Women of Distinction Girls Choir and the Young Men of Integrity Boys Choir. Over the years, the girls and boys choir have been closely connected through close family ties. There were triplets, twins (identical & fraternal), brothers, sisters, aunts and uncles that were a part as well as those who grew up in this group..

The 2009 Holiday season, the Celebration Chorus was afforded the honor and  opportunity to sing at the City Hall in Savannah, Georgia. During the 2010 Holiday Tour, the Celebration Select Chorus was chosen to sing at the  Georgia Governor's Mansion in Atlanta, Georgia, which they received many accolades and financial support from the community at large. In January 2011, this group was given the honor of representing the Youth Division of the Emancipation Association of Savannah, GA by performning three selections on their annual celebration. Now in 2012, The choir has been invited to perform a new venues such as:  The Savannah Mall, Large Group Performance Evaluation (LGPE) to be held at the Preforming Arts Center at Georgia Southern University in March 2013, GMEA District 1 Honor Choir,The 2011 & 2013 National Youth at Risk Conference and The 2013 GeorgiaConference Compensatory Education Leaders Conference.

The Young Men of Integrity Boys Choir is an all male choral group that was formed during the 2008-2009 school year from two all male 3rd and 4th grade classes. These two classes were made up of young men in which some, not all  were classified as at risk academically,socially and  economically .Performing in public as well as among their peers is having as well  has had a positive impact on these young men. Specifically,the vision of the Young Men of Integrity Boys Choir has expanded its horizons to in clude the school vision which is to: develop the whole child, mind, body and spirit.Membership in this choir is open to students in grades 3-5 of varying academic and musical abilites. Special permission to participate is granted to 2nd grade boys who are on a behavior contract  with collaboration between the homeroom teacher and music specialist

Due to the success and popularity of previous years, the group has attracted attention locally and nationally.The boys were featured in the 2010 March/April issue of the American Teacher(the offical magazine of the American Federation of Teachers),the front page of the May 15,2010,Savannah Morning News, The Summer 2010 Issue of the Georgia Music News and the 2010 Fall Issue of the Georgia Southern Magazine. At various times during the school year, plans are being made to do the following activities: motivational speakers, mentors and musicians who will come in to talk to the boys and well as conduct music master classes and mini concerts. The Young Men of Integrity Boys Choir performed during the 2009 holiday season, during Black History Month ,the Annual Spring Art Show 2010 and was featured as a special guest at the 2011 Annual  National Youth-At-Risk Conference sponsored by Georgia Southern University. The musical repertoire of the the Boys Choir include: classical music, jazz. r&b, spirituals, pop, world music and gospel. The Young Men of Integrity Boys Choir is under the direction of Dr. Alucia Walton. We look forward to continued success and the revamping of the Young Men of Integrity Boys Choir  this school year. 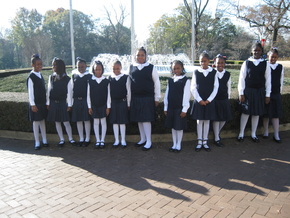 The Young Women of Distinction Girls Choir is an all female performing group that was organized during the 2009-2010 school year due to the popularity and musical excellence of the Young Men of Integrity Boys Choir.   The Young Women of Distinction Girls  Choir is a well balanced group of girls in grades 4-5 who have a desire to strive for excellent musicianship through singing by participating in daily rigorous morning rehearsals, Summer Music Camp, District Honor Choir, Choral Festival and performances through out the region.The musical repertoire of the Girls Choir include music from the following genres: classical,jazz, gospel,spirituals, world music, pop,  and festival/concert.
The Young Women Of Distinction Girls Choir has  performed for the Annual Schoolwide Black History Program, the Spring Art Show,  Local 1414 Longshoreman of Savannah, GA, and the  School Awards Day Program. At various times during the school year, plans are also being made for this group of young women to do some of  the following activities: motivational speakers, mentors and musicians who will come in to talk to the girls as well as conduct music master classes and mini concerts. The Young Women of Distinction Girls Choir is under the direction of Dr. Alucia Walton. We look forward to much success this school year.